Tim Hardie is a contestant in this year’s Self-Published Fantasy Blog off writing competition (further details are found in the blog of host author Mark Lawrence). His entry, Hall of Bones, is a Viking-inspired fantasy story. He takes over my blog today to tell you all about the inspiration behind his novels and his creative process. So without further ado I pass you to Tim!

Lelita was kind enough to allow me a spot on her blog for her latest entry.  She asked me to give her readers an insight into the inspiration behind my story and my creative process.

Every writer starts out as a reader.  I was thinking about this recently when I published my second novel, reflecting on the fact I was fortunate to grow up in a house full of books.  Although I didn’t know it at the time, when I was immersing myself in the classic works of Tolkien, Moorcock and Le Guin I was building up a store of reference points and knowledge that would serve me well when I eventually became a writer.

When I first started writing it was actually in the form of a diary, which I began as a means to stave off boredom when I finished Law College and found myself unemployed.  I continued with the habit after I found work and, whilst I might cringe when I look back on some of those entries, the seed of regular writing was sown during those early years.

Regular writing and reading are both crucial parts of the creative process.  It took me a while to figure out when my most productive writing times were and to build a routine ensuring the word count keeps ticking over.  Reading is really important too.  As an author I read books in a different way compared to when I was younger, noticing things like structure, character, use of language and description.  It helps keep you sharp as a writer and also aware of how the market is developing.  Whilst you should never write merely to try and be current, you do need to understand where your book fits into the wider literary world and who your comparators are in your particular genre.

The origins of Hall of Bones are found in the books I’ve read.  Robin Hobbs'sAssassin’s Apprentice was an important influence.  I loved the character-driven nature of her story in that book and the subsequent series.  I also enjoyed the political intrigue that played out in the king’s court and the wider realm.  When it came to writing Hall of Bones I knew these were both elements I wanted to weave into my own novel.  In terms of tone, whilst there’s a significant debt owed to Robin Hobb, Hall of Bones is a darker tale and there’s a strong influence from more modern fantasy, found in writers like Joe Abercrombie and Mark Lawrence.

The initial concept came to me, virtually fully formed, whilst I was on holiday in Cornwall way back in 2011.  It was one of those rare ‘bolt from the blue’ moments, where I suddenly knew exactly what I wanted to write (or at least, I thought I did).  I can’t honestly say why I wanted to use a Viking-inspired setting – it simply felt right and once the idea had taken root there was no way back.

I laid down the basic structure and wrote the first few chapters during that holiday, as well as carrying out some research into Viking culture, weaponry, trade, and ship building.  Hall of Bones is set in a fantasy world with its own religions and deities, so I deliberately steered away from Norse mythology.  Instead, the novel is a melding of medieval Viking culture into a completely new fantasy world rather than being, say, an alternate history or a retelling of those myths.

Writing isn’t something that just ‘happens’ – at least, it doesn’t for me.  After that initial idea, a significant amount of my time was spent on the world building aspects.  There’s a detailed and still developing pre-history to the world in which Hall of Bones is set, which influences the underlying narrative, although this isn’t immediately obvious to the reader.  Probably 75% of these world building elements don’t make it directly onto the page.  However, the combination of place and history helps shape the characters and their interactions with one another.

This story also involves a number of different competing clans.  The alliances and rivalries between each of those needed to be worked through.  I also spent a lot of time developing the individual characters and their relationships with each other, which drives the internal politics within the Reavesburg Clan (the clan to which Rothgar, the protagonist of my story, belongs).  This is every bit as important as what is happening beyond their borders.

Although I plot out the story in advance, I still allow my imagination to take things in a different direction.  I’d originally envisaged Hall of Bones being a tale built around politics and warfare, only to find the magical and fantastical elements became stronger as the story progressed.  I got to a point in the novel where I felt hemmed in and didn’t know where to take the plot next.  The introduction of more magic in the second half of the story opened up more possibilities and helped drive the narrative forwards.

Individual characters also exert their own independent pull on the story.  They become real and have their own ideas, often contrary to the plot I’d carefully planned before starting the novel.  It can be a giddy rush when something new is added in this way.  I’ve had instances where minor characters have emerged from the sidelines, becoming a key part of the fabric of the story by the end.  The interactions between characters can also produce unexpected results.  As the author, you put these things in motion and watch in amazement as they develop a life of their own.  Sometimes, it can feel like you’re there for the ride, rather than being in charge.

You still have to make sure you exercise a level of control over all these ideas.  The overall plot still has to hang together and sometimes I have to prune back these additions (a process I’m going through now with the third book in my series).  However, most of the time the final result is far better than the broad outline I envisaged at the start.

Looking back at what I’ve written, I’m not sure I’ve been able to fully explain what happens when I write creatively.  Whilst there are practical things I do to build writing into my routine, the actual process itself happens on a more instinctive level.  Whilst it can be hard work it’s also enormous fun.  I wouldn’t be without this part of my life and the fascinating thing is I’ve no idea where it will lead me next.  I’m looking forward to finding out what my characters have in store for me. 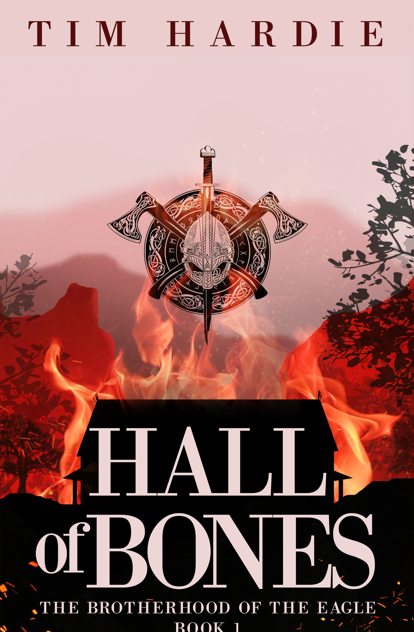 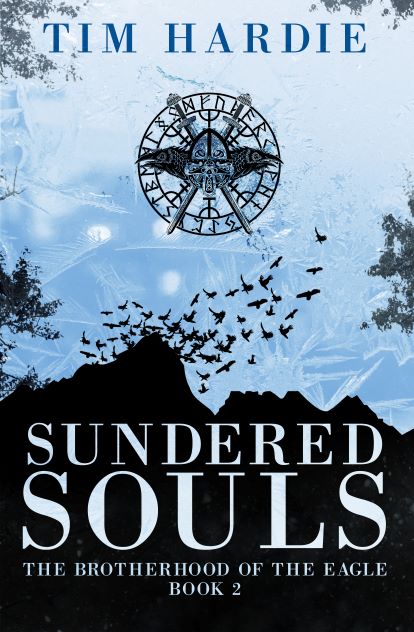 Tim Hardie is a contestant in this year’s Self-Published Fantasy Blog off writing competition (further details are found in the blog of host author Mark Lawrence).  His entry, Hall of Bones, is a Viking-inspired fantasy story.  Here’s the back cover copy to give you an idea of what the story is about:

In the remote land of Laskar the seven ruling clans have vied with each other for power for over a century.  The son of the Reavesburg Clan Chief, Rothgar, has been groomed all his life for a role supporting his elder brother, Jorik, in leading their kingdom when their father’s time finally comes to an end.

However, the rulers of their greatest rivals, the Vorund Clan, are in the grip of something older and far darker.  They have been conquered by evil, a remnant from the time when the gods warred with one another and the world of Amuran collapsed into the Fallen Age.

Everything is about to change …

The first book in The Brotherhood of the Eagle series, Hall of Bones begins a tale of epic fantasy, magic and intrigue.

Hall of Bones is available on Amazon and the sequel, Sundered Souls, has just been released and you can find it here.

Tim Hardie grew up in the seaside town of Southport during the 1970s and 1980s.  This was before anyone had even heard of the internet and Dungeons & Dragons was cutting edge.  Living in a house where every available wall was given over to bookshelves, he discovered fantasy writers like JRR Tolkien, Michael Moorcock, Ursula Le Guin, Alan Garner, Stephen Donaldson and Susan Cooper.  Those stories led him into the science fiction worlds created by Frank Herbert, Philip K Dick, Arthur C Clarke and HP Lovecraft.

After training to become a lawyer Tim lived in London for three years before moving to Yorkshire in 1999, where he has worked ever since in a variety of legal, commercial, financial and management roles.  His writing began as a hobby in his early twenties and has gradually grown into something else that now threatens to derail his promising career.

Tim writes epic fantasy that will appeal to fans of Joe Abercrombie, John Gwynne and Robin Hobb.  He currently lives in Derbyshire with his patient wife and two teenage children.

You can connect with Tim on social media or via his website: