Prologue: Where the Gulls Fall Silent

A small fishing village, a shunned healer, her daughter, tradition, superstition and a world set to change. Intrigued? I've posted the opening to my new historical fiction to give you a little taste. Hope you enjoy!

Where the Gulls Fall Silent

You were born in high summer, as the trade winds blew the stench of fish guts and rotting seaweed up from the shore. You were born in sweat and blood and fear. Meraud never left my side, my husband Cubert sat in the dust of the street, our son Enyon at his knee.

You were late, very late. I’d joked to my Cubert you’d be a late sleeper. He didn’t laugh.

It was like you knew what was coming, what you would bring. So when the cramps that dragged down my belly came to rack my body, I already knew you’d take your time, make me fight. Fight to push, to breathe, fight to hold you, fight to live. And I knew I deserved it. Like you, I knew what would come.

But fight I did, as I had from the day I was sure you lay within me. Tiny, barely anything but blood of my body, and seed of his. You brought sickness like I had never known, days, weeks in bed, I could stomach nothing but thin broth, your brother made it. He was a good boy. The house-keeping suffered, but Cubert never chided. Only worried as I paled and thinned while my belly swelled with you. I was older I told him, the years of my quickening almost done, that was why I suffered so. I knew it was a lie. So did you.

Finally, you relented, and as the last rays of the long days of August faded from the sky your cry, fierce and furious, a proclamation that you had arrived and you would not be cast aside, pierced the gathering gloom and brought Cubert rushing in, Enyon on his heels.

You were cradled in Meraud’s arms, slick with blood, red with anger, as she carried you to a bucket of fresh water to wash you down. But Cubert’s eyes sought only me. He loved me then, perhaps still… in two strides he was by my side, eyes wide. I answered the question that swam within those deep blue pools. Hands clenched as one, at least for this moment, I brought his palm to my lips and kissed him gently, I would take what I had left.

Would you believe his face brightened further, then softened with truest love at the announcement of your sex? It’s true. For that moment he loved you best of all.

Know that. I think it matters.

Enyon went straight to your side, as was his want in the days he was with us. Tall and lanky for his age, calm beyond his meagre years, he took you from your god-mother, swaddled in a scratchy woollen blanket and held you close.

“Bring her,” Cubert said, and he did.

Cubert went to move away, move to you, but I held firm his hand. Forgive me little one, but these were my last moments too. He looked to me, a shadow crossing his face. I smiled, too tired to confront that shadow.

Enyon held you out, pride shining from his features. I released my husband’s hand.

Cubert took you, gently. Tears filled his eyes at your perfect eyes, perfect nose, lips and cheeks. The light downy hair upon your crown. He swallowed and turned to wipe the moisture from his eyes, before laying you down on my chest.

I took you, and forgive me, but I paused, in that moment, in the glow of family, my family. I paused.

And then I pulled your swaddle aside. You wiggled at the touch of the cooler night-time air that still carried the stench of scales and death, but did not cry out. You knew who you were even then, it was up to him to decide.

Cubert  looked at you. At your tiny body, your perfect arms and hands, torso, legs, at your feet…

He stiffened, it was slight, but I was watching for it. He knew.

Our eyes met, the truth was told. I held his gaze, I would not turn away, not from you, never from you. He looked down at the swept dirt floor. The warmth and love and joy of the moment dimmed. As I’d known it would

Enyon shuffled over, I covered you quickly. Meraud rested her hands on his shoulders, just starting to broaden with adolescence, he would be the image of his father. He still glowed with wonder, the light of your coming condensed down to just his face, his energy.

It gave me something to anchor to.

I love him for that.

It was his surprise that told me Cubert had moved. That and the cold air that suddenly flooded the space beside me.

“Father?” Enyon called, confusion furrowing his brow. Cubert didn’t turn. Stride steady, he cleared our humble cottage, heading out the door to the pebbled streets of the port. He shut the door gently though. That was for you, a kindness, the only one his heart could spare.

Enyon looked to me, fear now creeping across his features.

I should have smiled at him, should have beckoned him to sit beside us, to talk, to explain, so he could understand.

But I was… tired. And you began to fuss… and, nothing forgives my selfishness but I ignored the plea in his eyes and brought your lips to my breast. I turned from my first born. He was still a boy.

“Go to your father,” Meraud gently prompted him. “Go on.”

He paused, caught in the knowledge that there was something amiss. Young enough to still be loyal first to his mother. I felt his gaze searching me, seeking my eyes, my words, my explanation. Mother always made things right.

But this I could not.

You began to suckle, gentle butterfly fingers on the fat of my breast, pressing softly. I smiled. At you.

I heard him leave, the slight scuff of the floor his feet made lately, they’d grown faster than his mind could compensate for, leaving him prone to drag his gait. He opened the door. It banged shut.

I closed my eyes, lips trembling.

The bed creaked as Meraud perched herself at my feet, her hand warm on my knee.

I lifted my face to hers, eyes red-rimmed with unshed tears. And smiled.

It did not matter, not one bit. Because you, you were perfect… you were worth it all.

Where the Gulls Fall Silent
out now through Amazon 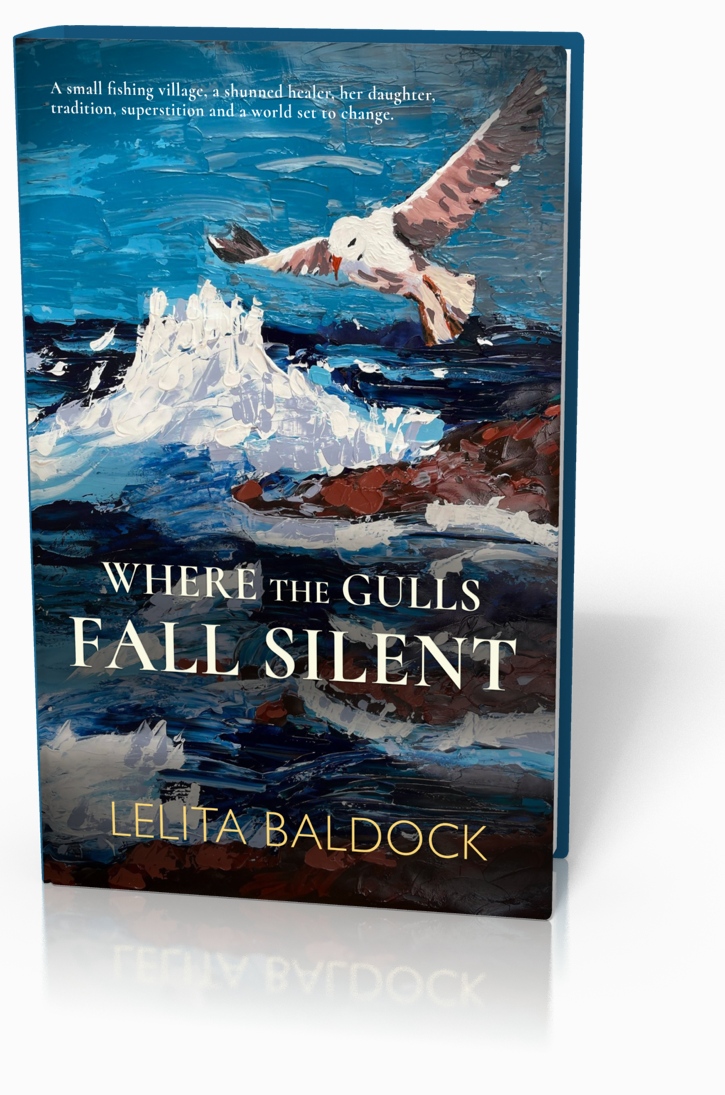