A hundred year old mystery, the widow left behind, a fallen soldier, an unnamed body and a young student determined to find the truth.

In 1886 famous English poet Edward Barrington moves from Derbyshire, England to a farm on the Finniss River, in South Australia. Two years later he disappears.

25 years later Archie Hargraves abandons his fiancée Clara and travels from England to meet with Edward’s widow, Rosalind. He plans to write a biography and make a name for himself, independent from his wealthy father. Returning to England in 1914 he abandons his work to join the war in Europe. His journal of notes from Australia is never released.

Ellie Cannon, a young PhD candidate at Sydney University, is writing a thesis on one of Barrington’s last known poems, The Fall. It’s not going well. Struggling with her relationship with her mother and loss of her father, Ellie is on the brink of failure.

Then a body is found by the Finniss River, 130 years after Edward’s disappearance. Could it be the famous poet?

The discovery draws Ellie into the worlds of Edward, Archie and Clara, taking her across Australia and England in her search for the truth.

Covering life in remote South Australia, the social pressures of 1900s Britain and the historical role of women, Widow’s Lace is an historical fiction, mystery cross-over dealing with themes of obsession, fear, love, inner-secrets and regret. But also the hope that can come from despair.

Back in 2004 I took a trip up the Finniss River with my family. The Finniss River is a tributary of the Lower Lakes in South Australia, near to the township of Goolwa and the Coorong National Park, where the Murray River meets the sea.

The river is quiet and winding, its banks covered in reeds. Teeming with birdlife and buzzing insects, the river feels isolated from modern life, despite its proximity to rural communities.

The idea of someone living alone on its banks came to me and I was inspired to discover why someone would make a life there alone, cut off from the rest of the world. The seed of a story that would grow into Widow's Lace was planted.

Over the next decade I honed the idea and my writing skills until in 2018 I was ready to begin.

Now, in 2020 I have completed my debut novel.  I hope you enjoy the story as much as I have enjoyed the process of writing it. 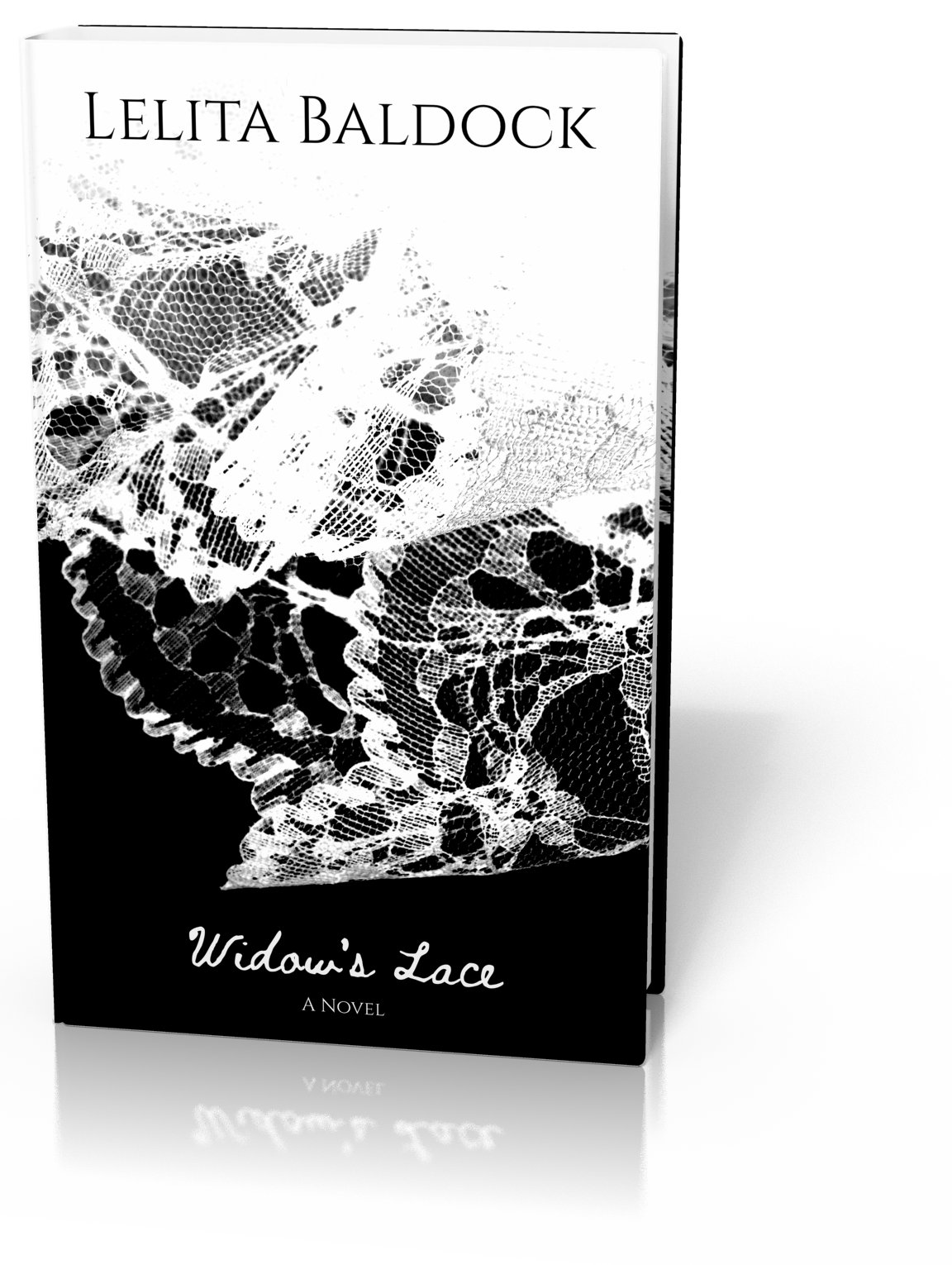 The long, loud wail of the ship’s horn blew a second time. Edward, sat in his carriage on the dock, took a deep steadying breath. It was time. Gripping the carriage handle, he straightened his shoulders and swung out of his seat landing lightly on the dockside. Before him the docks teamed with activity; families of steerage passengers trying to navigate the crowded space while keeping together and managing their luggage, cargo boys hauling barrels and steering groups of pigs and lambs, presumably water and food for the journey, baggage men carting the belongings of the rich. Several boats were in port. Large bails of what Edward supposed was wool and wines were being hauled by dirty, hefty workers. Smoke rose from large chimney’s on the deck of one of the cargo ships, creating a hazy shimmer over the dock, its heat and smell permeating the air and mixing unpleasantly with the slimy scent of the fish some men were catching further downstream.

Despite all the bustling distractions of the port, it was their passenger vessel that dominated the scene. The Orient, her dark steal sides glistening in the morning sun, rose up from the water like a leviathan. Long and sleek, her body would house some 500 hundred souls on her voyage to Australia. She was a combined design, powered by steam on the run through the Suez Canal, then by sail as they surged across the empty oceans of the Southern Hemisphere.

Currently, her decks were awash with sailors checking ropes and packing sails or having a final cigarette before official duty began. Edward closed his eyes a moment, gathering himself. You can do this, you have done it before, he reminded himself firmly. His thundering heart beat a silent resort he resolved to ignore.

Edward scanned the docks for a luggage worker to manage his belongings.

‘Excuse me, sir,’ a young man clad in tailored trousers and an Orient jacket stood before Edward. ‘Mr Barrington I presume? I’m Mr Davids, here to arrange your luggage, sir.’

‘I am Mr Barrington. Thank you. There is quite a lot I’m afraid, you may need to get some help…’

‘Don’t be worrying yourself, sir,’ the young man grinned up at Edward as he moved towards the luggage strapped to the back and top of the carriage. ‘Cabin 34, am I correct? ‘

‘Course, sir. Leave it to me.’ Mr Davids turned calling out to a group of lads standing off to the side dressed in brown slacks and shirts, not an Orient colour among them. The boys came running over, all pimples and fuzzy beards and began loading themselves up with more bags and boxes than seemed probable before heading for the ship. Mr Davids swung a smile at Edward and joined them, leaving him adrift in the sea of activity. He strode to the carriage and opened the door once more, ‘Darling, if you are ready to board?’

A white gloved hand appeared from the carriage to grip his own and he gently guided his wife, Rosalind Barrington, down the carriage steps to the dockside. ‘

Oh!’ The soft sound escaped her lips, but not his notice. Edward gripped her waist quickly, steadying her against the pull of gravity that threatened as her knees wobbled beneath her.

‘I am sorry my love,’ Rosalind breathed, ‘I must have risen too fast from my seat.’

Edward stared hard into her deep green eyes. Grey smudged the hollows beneath them, her skin waxy and pale. ‘Of course,’ he lied and gave her his most reassuring smile.

Rosalind smiled back, transforming her features to those of the healthy woman he married, offering a glimpse of why they were here, his hope and promise. If only for a moment.

They’d met 3 years ago at his poetry recital in Manchester’s neo-gothic Town Hall. Dressed in green silk trimmed with black lace, hair gathered in large cascades, eyes bright with copper tinge, Rosalind had turned every head in the room. Edward could not look away. Showing a uncharacteristic confidence, he’d approached her, dared to touch her arm, invited her to Hathrone to take tea. She accepted. A week later they stood beneath the apple trees, red with winter’s promise and declared their hearts.

‘I love you,’ he had whispered.

‘I love you too. But, I must warn you. I am to be a divorced woman. I will… damage your reputation.’

Edward had laughed. Rosalind’ s brutish husband was well known in society, loudly decrying his wife for the absence of an heir, while escorting a series of young women about town.

‘I am overjoyed that you are to be divorced. I do not wish to have you as a mistress. I wish to make you all mine. Now and always.’

Gently Edward wiped them away. ‘Don’t cry my love, not ever again. Until my last breath I will protect you. We will never know loneliness and sorrow again.’

They fell into each other and on a bed of leaves sealed their love, skin to skin, forever.

Straightening her sun hat, Rosalind turned to take in the docks. ‘This harbour is much larger than I expected, there are boats lining the water out as far as I can see.’

Edward leaned in close to her ear and whispered, ‘Follow the inlet with your eyes, where it seems to meet the sky? That is the start of our journey to Australia!’

Rosalind turned to face him, bringing their eyes, their lips closer. He felt a huff of breath as she laughed lightly, ‘What an adventure we are to begin.’

Edward’s heart tightened at the bravery of her words. Throwing social etiquette to the winds, he pecked her on the cheek, her skin warmer than it should be beneath his lips.

‘Come Mary, it is time we boarded,’ he called to the carriage.

The older lady, well into her 60s stepped gingerly from the carriage, the swelling of her ankles and lower legs had been troubling her more as the days cooled into autumn. Her right hand clutched a single satchel, all her worldly possessions. She had been with Rosalind since his wife was a child, it would have been cruel to take a younger maid. Mary had earned this. She looked up at him and nodded stoically. They turned as one and walked to the Orient, their transport to another country, almost another world. And hopefully a new life.